Andreas Regan (アンドレアス・リーガン, Andoreasu Rīgan), romanized as Andreas Reagan in the English Fan-Translation, is a fictional character from anime and manga series of Baki the Grappler. He is a professional wrestler of immense size, he is 2,4 meters tall and weighs about 310 kilos. In the anime his name was changed to Artemis Regan (アルテミス・リーガン, Arutemisu Rīgan).

Since he was a child he felt repressed since he was always told not to use all his strength, which made him feel very happy in his confrontation against Baki, since he could, finally, give his best. He also shows himself to be quite a nosy or provocative person, like when he got into the conversation between Kaiou Retsu and Sergei Taktarov.

Andreas is a man of immense size, he is over 8 feet tall and weighs over 600 pounds. He was easily the biggest man in the Maximum Tournament and even makes Mount Toba look small. He is among the tallest characters in all of Baki series, only outmatched by the likes of the prehistoric man Pickle and the surgically enhanced Jack Hanma.

Ever since he was a child, Andreas Regan had superhuman strength, causing adults to tell him not to use his full strength. This did not change when he became a wrestling fighter, since his Coach scolded him for beating his rivals with one blow, since the public was not entertained.

He was invited by Mitsunari Tokugawa to be one of the 36 fighters participating in his tournament. When Mount Toba and Baki are talking, he interrupts the conversation to mock Toba's size and express how happy he is that he is going to use all his strength. In the first round, he faces Baki, who overwhelms the giant by his technique.

Later, when Sergei Taktarov is arguing with Kaiou Retsu, Andreas meddles in the conversation, causing Sambo's master to break his hand. He is the first of all the tournament fighters to congratulate Baki on winning the belt.

In the anime, he is seen flying back to America with Iron Michael, Richard Filth and Yuu Amanai. His further whereabouts are unknown.

Andreas Regan is very strong due to his large build. Mount Toba claims that he can defeat any wrestler in the world with a slap or a headbutt, without using his true strength. But even after releasing all of his strength, Regan was no match for Baki Hanma. Later he got easily defeated by Sergei Taktarov, who brutally snapped the giant wrestler's arm with his Decapitating Cross Armlock.

Andreas Regan in the second season. 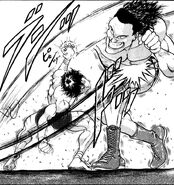