By manipulating his muscles and having them become as round as a ball, Biscuit Oliva can enter this bizarre form. Whilst in this state, it's nearly impossible to damage let alone move him because he can use his muscles to repel oncoming attacks. The technique allowed Oliva to withstand a direct hit form Baki's Goutaijutsu and spinning back kick easily without receiving so much as a bruise.

However, while at first glance it seems purely defensive, Biscuit can still fight back quite effectively; albeit he does it in a rather odd way. By quickly opening himself up and grabbing onto his opponent, Oliva can "devour" them with his muscles in a manner not too dissimilar to the character of "Pac-man".

Oliva used this move twice in his fight with Baki Hanma during the Great Prison Battle Saga, catching and crushing the younger man the first time. However, when Oliva tried to perform Ball again, Baki allowed himself to get caught and proceeded to shove two of his fingers into the older man's nose; causing the Unchained incredible pain which forced him to release the boy and leaving him with a bloody nose. 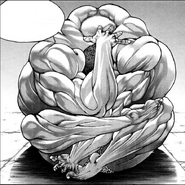