Biscuit Oliva (ビスケット・オリバ, Bisuketto Oriba), can be also romanized as Biscuit Oriba, is a fictional character from anime and manga series of Baki the Grappler. An assassin working for the US government as well as being a special jailer in the Arizona State Prison. He possesses an iron body and is almost invulnerable to anything. In the English dubbing of the second season, his name was changed to Oliver.

He is the strongest man in the USA and only man in the Arizona prison who has complete freedom as he is considered prison staff. Apparently, at some point the government decided that it was cheaper to pay for his massive meals, living quarter, library, and all the other expensive things he demanded in exchange for him living in the prison, where many prisoners are thanks to Oliva. He's a high-paid mercenary for the US government specializing in apprehending and terminating criminals or threats whose power are beyond the capacity of the conventional law enforcement and military to deal with.

His intelligence is above average. Despite the extreme focus on working his muscle mass, Biscuit Oliva has also increased his cognitive skills by reading and studying in various areas as he owns a massive library in his living quarter. He knows in full detail why nobles stuck their pinky out when drinking tea, as well as being skilled in toxicology. When it comes to combat skills, Oliva should be more knowledgeable than the average man, but he still falls short compared to eastern martial arts masters such as Kaiou Kaku or Doppo Orochi.

Oliva, like Yuujirou Hanma, is also extremely arrogant and contemptuous of most of his opponents. While quite knowledgeable in the area of martial arts, he is by no means a genius at it, making him vulnerable to complex techniques and cheat tactics. He shares his profession with Yuujirou as both of them are high-end mercenaries. Most governments, however, stated that Biscuit is far easier to work with than Yuujirou. Despite his arrogance and tendency to do things his own way, he makes a point to be good company to law enforcement who treat him with respect, such as Morio Sonoda, and also respects other martial arts masters who prove they can stand up to him.

While sometimes looked at as an arrogant hunk of oversized muscle, he can be a really likable man to hang out and have a drink with. He'll even offer the Police Captain Morio Sonoda a Japanese imported beer during his visit at his luxurious prison domain. A big smile is pretty much his default facial expression, especially during fights. It's rare that anyone manages to wipe it off his mug.

He is an enormous Cuban-born African-American man. He has brown skin, short black hair and a thin black mustache. At first, it's easy to mistake him for a man suffering from obesity, but on closer look it is noticeable that his body is just composed of muscles which are extremely developed. He's also known for almost always having a smile on his face. In his debut, he wore a red shirt and he didn't have his mustache yet, and in the third season, he wears a purple one. Usually, however, during fights he only wears a speedo, exposing his entire muscular body.

Biscuit Oliva was born in Cuba and later on migrated to America. He made a living as a prized mercenary for the US government as well as other countries in capturing and exterminating malefactors or threats that were too powerful for them to deal with. He also serves as a specialized jailor in the Arizona State Prison due to the facility containing some of the most dangerous criminals and him being the only person capable of truly keeping them in line.

In his later years, he is dispatched by the USA to fight Yuujirou Hanma (Baki's father, also known as the "Ogre"). After fighting his way through groups of drug cartel mercenaries, he encounters Yuujirou at the leader's mansion and proceeds to kill the cartel's leader, before trying to engage Yuujirou in combat. Oliva rushes at the young fighter with his fist, but Yuujirou avoids the attack. After a while, the Unchained introduces himself to him and it turns out that the young Japanese recognizes who he is and Oliva feels honored. After a short conversation, Yuujirou tells that it is too early to "eat" Oliva and decides to leave. The Unchained is disappointed and begins to explain that he came all the way to meet him. However, Yuujirou suddenly surprises him with a front kick that knocks him several feet back and allows Yuujirou to make a getaway. As Yuujirou leaves, Oliva smiles and says that Yuujirou will surely become even stronger. This scene only appears in the anime series and the manga never said how they both met for the first time.

In the second series of the manga, commissioner Morio Sonoda enlisted his help to capture the three remaining death row convicts after Spec and Dorian were defeated.

He goes to resolve a hostage situation and reencounters Jeff Markson, a corrupt cop he beat up in the past. Jeff shoots him with a shotgun, but Oliva endures it with his immense muscularity. Markson then attempts to stab him with a katana, but fails to do so due to a metal plate over Oliva's heart who then defeats and kills Markson in one punch.

Afterward, he goes to see Yuujirou and interrupts a fight between him and Sikorsky. When it appeared Baki had killed Sikorsky, Oliva congratulated him only for Baki to lash out. When the police show up, he claims he didn't know what happened.

Oliva later follows Sikorsky to his lair after the latter's fight with Baki. Despite Sikorsky's best efforts, he isn't able to do anything more than rip Oliva's shirt and is defeated. He later takes Sikorsky to the police. At the police station, he is ambushed by a disguised Doyle. Oliva manages to fight off Doyle but is unable to prevent his escape.

He then corners Doyle in a cave after he is blinded by Yanagi and makes him admit defeat by crushing him.

He is Dorian's "manager" for the tournament. He crushes Kaiou You in the tournament and afterwards is able to defeat Shobun Ron's skill named Hand Pocket stance with his own variation and three headbutts.

Baki gets himself arrested for the chance to fight Oliva. He takes Maria out of her room to watch him fight. He challenges Jun Guevaru for the title of unchained and defeats him.

Oliva is a gigantic man with such musculature as to look overweight when wearing a suit. His muscles are dense enough to repel close-range shotgun blasts and thrusts from a katana even before tightening them. Even Sikorsky's barrage of sharp knuckle strikes fails to cut his chest. He boasts the only training he needs is to keep his muscles in check all day, with his usual training routine consisting of pulling a helicopter down to the ground with nothing but his bare hands. Oliva also has an incredible amount of endurance and stamina, as well as a massive tolerance to pain, being able to tank attacks which could knock, fatally injure or kill others head-on with only slight or no injuries. He relies primarily on the strength and durability granted by his massive muscles, which is demonstrated when he managed to overpower a group of Olympic-level judokas with minimal effort. As well as when he easily broke the spine of Kaiou You, who bragged that his body was as strong as diamonds, with one move. His punches are so strong that they often cave in the chest of his opponents, killing them instantly. He once punched Jun Guevaru so hard that all the GPS of the world started to shake and malfunction. In his fight with Baki Hanma, he rushed through four prison rooms and punched Baki through a steel door. He could slam Baki to the ground and made a dent 30 cm deep. During the fight between Baki and Pickle, it was speculated that due to Oliva's size, strength, and fighting style he would go for a frontal attack against Pickle if the two ever fought. It was also stated that this would be a fellowship of two warriors with the same beliefs.

He also has an inhuman recovery speed, as he's managed to rapidly heal several hole-shaped scars he got from shotgun pellets just by eating steak. As the series went on, Oliva was still amongst the biggest muscles. Yet he lost a sparring (meaning they traded blow for blow using nothing but power and weight) match with Baki and got destroyed by Nomi no Sukune II. He later gets all of his ribs broken by Nomi's sheer grip strength and was slammed onto the floorboard. Luckily he survived as Nomi stated that if it had been a solid concrete floor, he would've died. 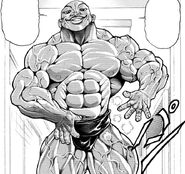 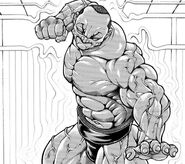 Biscuit Oliva using the Stance of the Kongou Rikishi.

Biscuit Oliva in the OAD.

When Biscuit Oliva wanted to see what Judo was all about.