The word Xiaoli literally means "Power of Disappearance" and it's a Chinese technique.

Defensive Xiaoli is a form of bodily control that allows the user to completely relax their body to a feather-like state, allowing them to present zero resistance to oncoming blows. It also produces hyposthenia, which allows the user to absorb all their attacker's body weight. With that, the user can't take damage from punches, kicks or slashes, as the attack would meet no resistance from the Xiaoli users body, and the user would simply flow with the attack like a blade of grass in the wind. Kaiou Kaku is the best user of this technique; he absorbs the impact of attacks so perfectly that even full force punches from Yuujirou Hanma, a man whose almighty strength has been compared to an entire nation's modern military, couldn't damage him (at least nothing worse than giving him a bloody nose). Yuujirou also learned how to do this technique with ease, and used it during his fight with Kaku. In the fourth series of the manga, Kaiou Retsu also mastered this skill, but he couldn't protect himself against Musashi Miyamoto.

Defensive Xiaoli does, however, possess flaws. When a person takes a hit, they have the natural instinct to stiffen up and fortify themselves so as to withstand the blow, even though this actually makes the situation worse for them. Because of this, Xiaoli is incredibly difficult to master. Some people train for decades and still never come close to being able to use it. Another flaw is how if one is able to catch a defensive Xiaoli user off guard, the defensive Xiaoli user's natural instinct to stiffen up before a blow lands may overpower their training, causing them to take significant damage. An example of this is when Yuujirou Hanma pulled out one of Kaiou Kaku's hairs to trigger his reflexes and provide Yuujirou with the opportunity to do damage. Defensive Xiaoli is also weak against throws and being slammed against surfaces.

The user can also use this ability of ultimate relaxation in another way, by using that force against his opponent. This is known as Offensive Xiaoli. 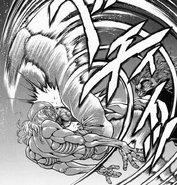