None
Demon Face (鬼の形相, Oni no Men) is a special fighting skill of the Hanma family.

The Demon Face is a "technique" in which the user very forcefully flexes the back muscles to form the face of a demon. The user becomes many times stronger to their level prior to activation in every aspect, experiencing an increase in physical strength, speed, endurance, stamina, etc. The user can virtually absorb any hit, such as when Yuujiro Hanma ceased taking damage from Kaku Kaiou's Offensive Shaorii strikes, which normally produce enough force to shatter walls. Additionally, the user can dish out massive amounts of damage in return.

In truth, the Demon Face is not so much a technique as it is a predetermined advantage such as height or muscle-building capacity, since it is a gift depending on genetics and bloodline. However, it can be treated as a technique since it is only activated when the user decides to use it.

The Demon Face is a gift bestowed on the Hanma bloodline. It has three known possessors.

One member of the Hanma bloodline that is excluded for an unknown reason is Jack Hanma. Jack is Baki's half-brother, and has a different mother. He has never been known to have or have used the Demon Face, though it's ambiguous as to whether this is a result of him being born with a weak and frail body, constantly taking drugs that artificially enhanced his body, or just not inheriting the proper genetics to do so. 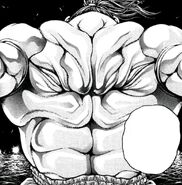 Yuichiro's back during his fight against the US Navy.

Yujiro during his fight with the US Army as a teenager