The fighter uses all his strength, strongly kicking the ground behind them as a means to boost the power of a punch they throw in the opposite direction. Kaiou Chin is the best user of this technique. In the second series of the manga, he almost defeated Kaiou Jaku with this punch. Later, it turns out that Mohammad Alai Jr, and by extension all boxers, use the same technique: kicking or stepping off of the ground in order to increase the power and speed of their punches.

For the first time in the series, this move was used by Kaiou Chin during his battle with Kaiou Jaku.

In the third series, Jun Guevaru planned to make an attack that would be king of evolution of the Earth Logic skill, according to him, adding the power of the Earth's core. However, before he could do it he was crushed by Biscuit Oliva. 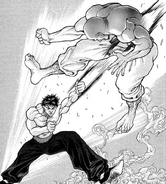