Gerry Strydum (ゲリー・ストライダム, Gerī Sutoraidamu) is a fictional character from anime and manga series of Baki the Grappler. He is a general in the US Army and Yuujirou's companion. He originally met Yuujirou as an enemy in the Vietnam War, where he was nearly killed by him.

A captain and later general in the US Army and Yuujirou Hanma's companion and comrade-at-arms. He developed an admiration for Yuujirou, and now he travels, fighting with him on the battlefields across the world. He somewhat understands Yuujirou's mentality and mentions that he is the only person to bring the United States to its knees. However, it is often seen that Strydum cannot stand situations in which Yuujirou abuses his brutality and ruthlessness. He seems to know him well and understand his wild way of thinking, but he usually disagrees with his actions. Strydum is also a friend and mentor of Baki's, who keeps him up to date about Yuujirou's whereabouts.

Strydum is rather a tough guy with a calm and confident expression, but also has a quite caring side of personality side. When Baki was 13, he showed a lot of interest and concern for him. Even tried to help him become stronger. He started to fear for the boy's life when he found out that he unintentionally sent him to fight Gaia. He was also very concerned during a famous fight between Baki and Yuujirou, when Baki was brutally beaten and Emi Akezawa was killed. Strydum is a loyal friend of Yuujirou, but he always seems to be more on Baki's side about that father-son conflict. Even if he's never said that to anyone directly, he has always felt sorry for him because Baki's mother has always been on Yuujirou's side, and a hardworking boy in general has never received proper love from his parents.

He's a pretty brave man. He has the courage to call out Hector Doyle on his underhanded ways. Furthermore, he even challenged Yuujirou in the third manga series. Unfortunately, his courage does not always go hand-in-hand with making wise decisions. During his first meeting with Yuujirou, he recklessly wanted to shake his hand, giving himself freely into his hands and barely escaping. A similar situation occurred when he wore mechanical armor and challenged Yuujirou.

Strydum is a grown and well-built man, despite his age. He has gray-blue eyes. He wears short-cut hair. In the first two seasons of anime, his hair was blonde, and in the third season he has already grey color of hair. Strydum has a lots of scars on his face after many battles in the war. He's usually dressed in his soldier uniform and military beret. It is very rare to see him dressed in any other way.

During the war, Strydum meets Yuujirou Hanma for the first time. This situation is happening when Yuujirou massacres American soldiers in one of their Vietnamese headquarters. Strydum starts praising the Japanese soldier for his amazing skills and decides to shake his hand. In that moment his soldiers are targeting Yuujirou with their guns, and Strydum tells him that he has ordered his men to shoot them both if he is taken hostage by a Japanese fighter. Thanks to that, Strydum is sure that he can shake his hand with peace of mind. Yuujirou agrees, shakes his hand and then grabs Strydum with a fast move. The soldiers start shooting, Yuujirou runs off blowing up the wall and Strydum almost dies. Fortunately, it turns out that he forgot to take off his bullet-proof vest and ends up with only broken ribs from bullets. Strydum says he's a stupid lucky man, and then he loses consciousness.

The anime also features a scene in which Strydum and Sir talk to the President of the United States and wonder what to do about the famous Yuujirou Hanma. Strydum explains to the president that he met a Japanese man and considers that his actions are unlikely to be ideologically motivated on the battlefield. He explains to the President that Yuujirou seems to simply enjoy fighting in war and massacring his opponents. Then the president tells him that if all of America's best military units were killed in a clash with Yuujirou, then they should go one step further and ask Biscuit Oliva for help.

Strydum's detailed past in the war is unknown, but he has many scars on his face and has a high status in the ranks of the American Army, so it can be assumed that he fought on many battlefields and showed up as a good soldier. At one point Strydum becomes Yuujirou's comrade and starts to accompany him most of the time.

During the Childhood Saga, he appears for the first time when Yuujirou decides to come unexpectedly to the place where Baki Hanma (Yuujirou's son) has just finished his fight with Kaoru Hanayama. Yuujirou arrives at the scene by helicopter, which is piloted by Strydum.

When Baki finds out that he will soon have to face his father, he comes to Strydum for help. The soldier tells the boy about Yuujirou's extraordinary power, which is based largely on his crazy ego. Strydum comes up with an idea that might help Baki become stronger. He finds that Baki needs to go through his own battlefield and decides to send him to Hokkaido, where currently lives five powerful soldiers. Eventually they fly out together by helicopter to Hokkaido, Strydum wishes him good luck and tells him to be very careful, then Baki jumps out with a parachute and lands. Some time later Strydum meets a man called Sir, who is his old friend from the war. For a moment they carelessly talk about the Sir's retirement, and then Strydum tells him that he sent Yuujirou's son to Hokkaido to fight five soldiers. Sir immediately realizes who exactly these people are and who is their commander. He tells Strydum that their leader is the legendary Gaia, a powerful super-soldier. Strydum starts to worry and fear for Baki's life. Soon, however, he is positively surprised, and the boy greets him after his victorious return from Hokkaido. Strydum meets with Yuujirou and tells him that Baki was able to defeat Gaia.

Strydum organizes a place of the duel between Baki and Yuujirou. He chooses the American Armed Forces Base located in Japan. Due to extraterritoriality, the Japanese police are not allowed to interfere. Strydum and Baki appear there in the afternoon. The young fighter starts warming up and tells the soldier that he intends to do it until midnight, when the great duel between father and son is to begin. Finally the fight begins and Strydum witnesses a great family tragedy in which Baki is massacred by his father and Emi Akezawa is killed by her beloved. The soldier is beginning to regret that he allowed this battle to take place.

In the Underground Arena Saga, he appears for the first time during Baki's fight with Koushou Shinogi. After the fight, he meets Baki and informs him that the boy still would have no chance against Yuujirou if he had such big problems with Koushou Shinogi. The Strydum's words make Baki a little scared.

Later, there is shown a scene in which Yuujirou and Strydum watch Baki fights Mount Toba in the Underground Arena. When the fight is over, Yuujirou jumps into the arena, a duel between him and Doppo Orochi is planned, and then Strydum takes Yuujirou's from the place by car. Unfortunately, on the way a soldier has to stop by some boxing club, which Yuujirou decides to enter and get a little crazy. When the day of the duel between Yuujirou and Doppo comes, Strydum meets Baki in the audience and starts talking to him. He sees that the boy is terrified and explains to him that Yuujirou's skills are an abnormal phenomenon that began to arise during old battlefield experiences. On the same day, Baki fight Kureha Shinogi and Strydum watches their battle with Yuujirou. Both comments on the duel from time to time, and Yuujirou explains to Strydum many techniques or phenomena that take place in the arena.

Strydum does not appear in the Maximum Tournament Saga. For unknown reasons, he does not come to the Underground Arena with Yuujirou to watch the battles. However, in the saga there's a story of the war in which Strydum met with Yuujirou for the first time. This retrospection is described in the "past" section.

Strydum is a very experienced soldier and fighter, as shown in the manga. While fighting against several well trained fighter he had hand picked. The first one he beat with a groin kick when Mark tried a high kick. He then pocked the eyes of a judo practitioner, threw a boxer on the ground, knocked out a wrestler with a punch, tied a Chinese martial arts fighter up in his gi and belt, etc. He did all this as a lesson on private martial arts verse battlefield fighting. And, he also did it all with one move each.

Strydum is good in using weapons and explosives. He once put on himself an armor that had explosive power in his knuckles and his boots. The armor also covered his body weakness. He wanted to fight Yuujirou in this form, but despite all that, he was no match for him. 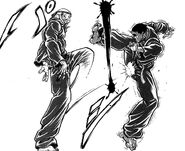