The user of the technique must put the neck back, and then move it strongly forward, attacking his opponent face with a head or just causing their heads to collide. The user can also grab an opponent's clothes to pull themselves closer and for a stronger impact. Although this technique does not require special martial arts skills and is typically based on brute force, even martial artists sometimes use it in matches because it is very effective.

During the first series, Doppo Orochi used a headbutt to break a concrete pipe. Even the great master, Gouki Shibukawa, used it against Doppo in their fight during the Maximum Tournament. Later, also at the same tournament, Kaiou Retsu used the top of his head against Baki Hanma. In the second manga series, Baki Hanma used this technique in his fight with Sikorsky. During the third manga series, Baki also used the technique against Biscuit Oliva. Later Kaiou Jaku used the technique on Kaiou Retsu but with the back of his head. In a more defensive purpose, Doppo used the technique against Kiyosumi Katou to break his finger in the fifth series of the manga.

Chiharu Shiba created his own version of this technique, called the Face to Head Hit, hitting his opponents with his own face rather than with his forehead.

Doppo using a headbutt against a concrete pipe. 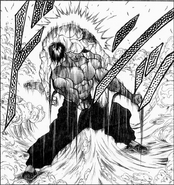