Hector Doyle (ヘクター・ドイル, Hekutā Doiru) is a fictional character from anime and manga series of Baki. He is a death row inmate who escaped the Caglios Prison to find a suitable opponent to face him. He survived his execution on the electric chair. He doesn't use a specific fighting style, but is extremely dangerous due to his modified body.

He is a calm person who usually doesn't show too much emotion, except for small and confident smiles. Doyle is a skilled and experienced assassin who often outplays his enemies and targets, though this is usually because of his element of surprise when fighting. He has his own approach to the combat. Doyle says it's fine for any to fight dirty which including when someone brings a gun to a fight. For example, Gerry Strydum is disgusted by Doyle resorting to explosives in a fight with Koushou Shinogi, Doyle doesn't see why he shouldn't use his best weapons in a fight.

Despite being an assassin, he shows also his much more kind and normal side. Kaiou Retsu was his opponent, but at some point Doyle started to protect him when he was unconscious. And he did this until the morning. After being beaten down multiple times by Katsumi Orochi, Doyle amicably admitted defeat to him and decided to take off his shirt as an act of respect. He ends up being a much more humble person after all of this. Also, he asked Katsumi to teach him karate, and finally they even became friends. It seemed like he was about to turn a new leaf after finally getting over himself and admitting defeat, but he get attacked by Ryuukou Yanagi, blinded, and barely escapes alive into the sea. Shortly after that, he's found by Biscuit Oliva, who breaks his back and apprehends him.

It is often said that he is the most decent of all five convicts. Out of all of them Doyle killed the guards in the least brutal way, and he let the technician live, while all the others killed everyone at the scene of the prison breakout. It should be added that his job was an assassin after all. Basically, he probably just killed for a living. It is unknown why he was sentenced to the electric chair, but he might have landed on death row after a failed assassination. Of course this doesn't make his killing any less horrifying, but at least it sets him apart from the others.

Hector Doyle is very muscular, and he stands at around 6ft, or 6ft 1in. Both his long sleeve shirt and pants are black, and his hair is a red color. His eyes are also red like his hair. Has a fairly feminine face (enough to let him pass as a policewoman to perform a surprise attack on Biscuit Oliva). Despite his musculature, he seems to be the slimmest of all the convicts who came to Tokyo.

Later, he wears a simple eye patch, after he lost his left eye in his fight against Kaiou Retsu. In Revenge Tokyo, when he was shown in prison, he was no longer wearing an eye patch. He seems to have given up wearing it after full vision loss.

Not much is known about Doyle's background. At first glance, it seems that he was just an assassin, but while not clearly stated, he was probably a soldier in the British Armed Forces since in Britain the death penalty only exists for treason and military law, and he had a soldier acquaintance who helped his escape to Japan. In fact, even his British nationality is not entirely certain, because as a side note, he is presumed to be Scottish since he referred Ardbeg Scotch as being "a drink from my home country" during his later conversation with Retsu, but perhaps this is merely a mistake by the author. In the manga, he is first seen in what appears to be an electric chair. During that moment, his final words are "I want to know defeat", before swiftly breaking free and killing the prison guards. After escaping from prison, Doyle flies by plane to Japan. Some time later, he arrives in Tokyo along with fellow convicts Dorian, Spec, Sikorsky and Ryuukou Yanagi. It turns out that at the same time five murderous prisoners from all over the world came to Japan. They all came for the same purpose (to know the taste of defeat) and this was done by a phenomenon called synchronicity.

Doyle meets Rob Robinson, an American kickboxer, who went for a jogging in training. The convict sits on a bench and reads a newspaper, which he then throws like a rotating sharp object at Robinson and cuts his cheek. The American kickboxer is terrified, but tries to resist. However, after a short clash he ends with a slit neck when Doyle brutally attacks him with his modified elbow. The convict is a bit disappointed.

Later, there is a scene in which Hector Doyle and the rest of the escaped prisoners meet with five fighters of the Underground Arena. Together with Mitsunari Tokugawa, the owner of the arena, they establish a "war" between convicts and arena fighters.

During some lesson at Baki's school, Doyle jumps unexpectedly into the classroom through the window. He tells Baki that he overheard his unpleasant conversation with the teacher and thought that Baki would be happy if the prisoner interrupts their discussion. The young champion thanks him for the coming and they start the fight, but after a short while Baki escapes through the window, not wanting to fight in class with students due to the danger of observers. Doyle smiles and just lets him escape.

He disguises himself as a female officer and attacks Oliva inside a police station. He escapes through a vent.

He is attacked by Yanagi while on a ship and becomes blinded in the process. Oliva tracks him down in a cave and breaks his back with a bear hug, capturing him.

He's currently in jail and training himself, he gained the ability to hear insanely well after being blinded, but he deafened himself and now his sense of touch is so good he can literally feel the vibrations that sound makes to "hear" and "feel" the world around him to "see".

He fights using metal blades implanted into his joints and controlled by a spring system that is inside his fingers. Doyle has high durability: he survived after being shocked with an electric chair, survived after being attack by Retsu Kaiou who used multiple weapons, and he still had strength to fight two thugs. He protected Retsu, staying until the morning, and he lost a lot of blood, but survived.

He also has a generator in his heart which boosts his strength. He has a bomb strapped in his chest that detonates upon physical contact, which is also controlled with his nerves. During the move, when the opponent is near Doyle; he began to use his nerves to activate the bomb strapped to his chest and creates a deadly explosive blast that can severely burn the opponent's body. Doyle used this in his fight against Koushou Shinogi as his finishing move; managing to severely burn the karate expert's body before he got a chance to use his Cord-Cut technique. Even though the "chest blast" move is a dangerous and deadly technique to use by a master of hidden weaponry such as Doyle, some fighters with great honor, such as Gerry Strydum, consider this move in disgust as a dirty and unhonorable move to use against martial artists in a hand-to-hand combat fight.

He also has a switch located in his ring finger that makes his spring-loaded arm shoot out with such speed and force that it causes the face of those hit by it to sink into itself almost turning inside out. Doyle is strong and fast enough to defeat a prison guard with that punch immediately after he shot at him. He also used it against several powerful fighters such as Koushou Shinogi, Biscuit Oliva and Ryuukou Yanagi, for example.

Doyle is also good in using weapons and different objects. For example, he wore fire-proof clothes and used a bag of mixed wheat flour and gunpowder to destroy the Shinshinkai dojo. He also uses dirty tactics whenever he can like using explosives to win.

After being rendered blind by Retsu and Yanagi, Doyle's hearing improved to near superhuman levels. However, he later deafened himself intentionally, and now relies strictly on his sense of touch, which has similarly been enhanced even capable of catching bats mid-air. 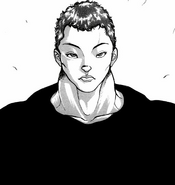 Hector Doyle in the manga.

Hector Doyle in the OAD.