Kaiou Jaku (寂 海王, Jaku Kaiō), often wrongly romanized as Kaiou Jyaku, is a fictional character from the Baki the Grappler franchise. He is a martial artist whom competed in the Chinese Challenge Tournament in China. He is known to be a famous martial arts instructor for young people within his home country of Japan.

Jaku is an eccentric but kind-hearted individual. His offers to his opponents of working alongside him as a martial arts instructors can be seen as either a genuine request or a misdirection to confuse his opponents, exploiting that oppurtunity to attack, or possibly a mix of both. In any case, Jaku is an opportunistic fighter, dislocating Retsu's arm whilst about to shake his hand and later headbutting him as he was distracted.

He seems to be near solely motivated by aiding and instructing the youth of Japan to be strong people and fighters, routinely asking competitors to aid in this endeavour as martial arts instructors.

Jaku is a Japanese man of medium height and stout build. He is bespectacled with a shaved head and despite being of Asian origin, has a somewhat unkempt beard and hairy legs though after his fight with Retsu, his beard was converted into mutton chops much to the audience's amusement.

Outside of combat, he wears a professional-looking white shirt and trousers. Inside combat, he removes his shirt and glasses, donning his gi and black belt.

Jaku, befitting his title of Kaiou is a very strong fighter. He specialises in Kukendo, an eclectic Japanese martial art very similar to MMA with emphasis on striking, grappling and ground combat. Despite his technical knowledge and strength, Jaku is completely fine with using what many would consider underhanded tactics, utilising trickery to great effect during combat.

His endurance and tenacity is also nothing to scoff at. Notably, Retsu noted that he utilised his entire arsenal of strikes at full force for minutes on end on Jaku, whom was able to persist through this barrage. He endured this through being able to use his back as Retsu's target instead of his front, as any human's back is able to withstand nine times more damage than the front. 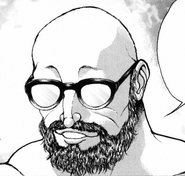 Kaiou Jaku in the manga.