White
Black (when he was young)

Kaiou Kaku (郭 海皇, Kaku Kaiō; Chinese pinyin: Guō Hǎihuáng) is the greatest and renowned Supreme Grandmaster of Chinese Kenpo, the Kaiou of Kaious and current champion of the Raitai Tournament over the last century. He was also captain of the Chinese Team representing China in the Raitai Tournament. Kaku Kaiou is a father of Shunsei Kaku. He is roughly 146 years old when first seen in the manga.

Kaku Kaiou has shown to have both sociopathic ruthlessness and pride in Chinese Martial Arts and its culture going as far as stabbing three Chinese Martial Arts Association elders in the hand with a needle and then slicing off their limbs with a simple hand chop, and dismissing two current Kaious due to "emergency" to replace them for his son and best friend in the name of China and its martial arts to win the Raitai tournament and not lose to foreigners, going as far to even kill the other team so that a Chinese fighter would win the tournament. After his son Shunsei's flash defeat against Baki Hanma, just after he promised to kill him to save the Chinese team's face, Kaku tells him he is not sure if he is really his son and he should drop martial arts forever.

He has also displayed very little emotion and has abandoned all joys of life in the pursuit of strength and being the strongest martial artist in the world. While old age has made him look down on the younger fighters, he has shown to only respect Yuujiro Hanma, due to the fact that Yuujiro was able to beat and almost kill the old man by giving him an enjoyable match and honorable "death." Kaku Kaiou respected Yuujiro's strength and fighting abilities so much he granted him the title of Hanma Kaiou and doesn't deny the fact that Yuujiro earned it and blesses the King by wishing they see each other next time in a hundred years for the next Great Chinese Tournament.

Kaku Kaiou, due to his more than a century-long years of experience and learning, as well as perfecting the weaknesses of his abilities, has a vast variety of knowledge, especially over martial arts. He is a perceptive character who can very easily see through the mentality of another person, how they prefer to fight, their level of power, and much more. He's very clever, as he escaped a certain death by the hands of Yuujiro Hanma through very deceptive tactics. He draws his inspiration from his own past misguidance, as well as life all around him.

In the Hanma Baki series, Kaku is shown to make an appearance at the request of Kaiou Retsu to help train and aide Katsumi Orochi in the fusion of Chinese Kung Fu's 4,000 years with Karate's 500 year history. In this series Kaku is shown in a more nice and friendly personality with a bit of comedic sense.

He is a shrunken, almost skeleton framed elderly man aged 146 years. He stands shorter than Baki, has long white hair, a prominent and copious amount of wrinkles over his entire body and face, and has very long finger nails. Attire-wise he wears a Chinese cap and round glasses on his head. A light colored knee-length tangzhuang jacket and matching pants with kung fu shoes. When not fighting he is seen sitting in his wheelchair.

In his youth he is seen being very large and muscular being almost the same size as Biscuit Oliva. His long black hair being tied in a traditional topknot and wrapped in a cloth with a robe wrapped and tied around his waist. But due to his first loss at the hands of an elderly Kung Fu master Kaku abandoned all weight training equipment and began his Kung Fu training only to notice his once large muscles began to shrink and wither away to his current body.

Kaku Kaiou was once a young, arrogant strong-man who considered himself to be the strongest man in the whole of Asia. He believed the strong will always overcome the weak, and laughed at the logic of Chinese martial arts. He thought that the physically weaker can't beat those stronger than them. In these times, he took part in a lot of fights with wild animals and fighters. But one day, Kaku fought an elderly Chinese martial arts master and he was easily defeated by him. After that, he decided to give up with body training and started to take seriously the philosophy of Chinese Kenpo. After an extremely long time, he finally obtained the true power of Chinese martial arts. Despite being a shrunken fighter, he became the supreme grandmaster of this fighting style.

He talks about how Shibukawa's Aiki compares to his Shaori.

Kaku Kaiou is a powerful grandmaster of Chinese martial arts and the strongest of all Kaiou, except Yuujiro. He has a wide knowledge of everything. His skills, the result of over a century of training in Chinese martial arts, allows him to easily defeat a Muay Thai-using Kaiou Samwan, who is a fifth his age, in less than ten seconds without sustaining an injury. Kaku used the finger flick to finish off Samwan in their short fight; by pulling his pants off and hitting him in the testicles, which made the taller Samwan faint from pain. He can slice several human limbs off with a simple chop of his hand, and even injure and send Yuujiro flying himself, making him a few people beside Orochi and Baki to be able to fight toe-to-toe with Yuujiro. Kaku can also perform attacks with supersonic speed, that can easily cut an egg like a sword. Despite his age and superannuated body, Kaku was shown a considerable amount of durability and stamina as he takes several punches from Yuujiro (two of them when his demon back is active) which dent him to the wall and not just survive them even still fight with him without seemingly much noticeable injury.

Kaku only once uses dirty tactics: in the battle with Yuujiro Hanma, Kaku was shown to be able to fake his death by stopping his own heart temporarily to avoid being killed by his opponent. It can be considered as a coward tactic, but for Kaku, it was just a cunning and great plan to survive. Even Yuujiro had to admit that he found it funny and crafty.

The full extent of his power at this time, however, was never stated. His primary technique is called Shaorii that produces hypoesthesia, which allows Kaku Kaiou to absorb the whole body weight of his attacker. The ultimate hypostenia can absorb, contain and release 'the ultimate punch'. Using this technique to perfection, Kaku Kaiou, even though physically far weaker, was able to go toe-to-toe with Yuujiro Hanma and even backed him into a corner for one moment.

Kaiou Kaku uses the force of Yuujiro's own punch plus his own strength to send him flying.

Young Kaku lost to the old Chinese Martial Art master. This event caused him to change his way and devote himself to Chinese Kenpo.

Young Kaku trained in the art of Chinese Kung Fu.

Kaku prepares to use Defensive Shaorii. 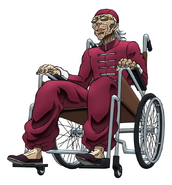