Samwam has a very tall and slender body build, yet possess developed muscles.

He faces Kaiou Kaku in the Raitai Tournament, but is defeated in 8 seconds after Kaku pull off his pants in front of everyone and flicks his balls with enough force to render him incapacitated.

He later attacks Yuujiro in rage of humiliation of his loss but Yuujiro quickly slams him into the ground, mocking about his inexperience.

Kaiou Samwan is a skilled fighter who earned Kaiou rank. He could play with a cobra when he was child. He is almost strong enough to destroy a stone column with a kick. 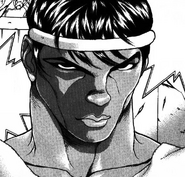