Kaiou Kaku (Grandmaster)
Kaiou You (楊 海王, Yō Kaiō; Chinese pinyin: Yáng Hǎiwáng) is a fictional character from manga series of Baki. He is a Chinese fighter specifically trained into having a "diamond body". He took part in the Raitai Tournament.

You is primarily shown to be very ruthless, having no issue relentlessly pummeling Dorian despite his obvious mental disability.

Additionally, he's shown to be very arrogant, bragging about the apparent indestructible nature of his body, even willing to give his opponent Oliva, a free shot, confident he could take any attack thrown.

Kaiou You is a skilled fighter with Kaiou rank. You claims to primarily practice Kongoken, a form of strength and endurance training used in many martial arts. According to You himself, he claims to have a "diamond" body, which he trained to withstand strikes from wooden swords, chains, being run over by a heavy loaded truck and being shot by an old fashion cannon ball. His strongest feat is staying conscious after standing under a waterfall in the midst of a typhoon.

However, the weakness of this technique is that it's designed to withstand fast strikes and blows. Biscuit Oliva was able to work around this by simply using his immense strength to crush his spine, effectively making his well trained body useless. 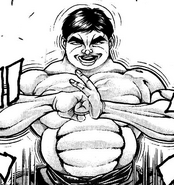 Kaiou You in the manga.

Kaiou You in the fourth anime series.