Kanji Igari (猪狩 完至, Igari Kanji) is a fictional character from anime and manga series of Baki the Grappler. In the English dub, he's called Kanjo.

Kanji Igari is an old pro wrestler known all over the world. He loves the audience during his fights and the audience loves him. Extremely unusual is how the crowd can give him motivation and strength. He is in his definitely best condition when people watch him and shout his name, and many fighters can confirm this phenomenon. Even when in the locker-room he seems to be a resigned old man, after entering the ring he becomes a powerful star.

He's known for the cunning side of his personality. No one ever knows what to expect from him in his fights and often uses the worst of psychological plays. For example, before the 3rd match in the Maximum Tournament, he realizes he could lose and goes so far to kneel and cry, begging Baki Hanma to let him win, but this is simply one of his means of psychological warfare to make Baki underestimate him. He is well known for fighting dirty, going as far to kick Baki in the balls, as well as pretend to give up so he could sneak attack him and even going so far as to hire an actress who looked enough like Baki's mother Emi Akezawa to try to psychologically hurt Baki out further. At the same time, he is very honest with himself. He knows his weaknesses and limits. Igari uses these tricks mainly when he has to do that. However is he is not unable to fight fairly: a good example is his great duel with the former yokozuna named Kinryuuzan, although he knew that he had to use something more in case of a fight with Baki or Sikorsky.

Despite his selfish efforts to win the battle and his lack of fair-play, he admires other great fighters. It could be seen that he has a respect for Kinryuzan, admires Baki and exceptionally appreciates Mount Toba, with whom he has both a rival and kind of friendly bond.

There is usually a smile and confidence on his face, but he can also get into a rage. It can be seen that Igari doesn't like it when someone looks down on him. He got angry when Shuumei Kanou arrogantly tested Igari's ability to sense the coming danger or when Rob Robinson treated him like some aging pro wrestling star. At the same time, it is sometimes difficult to tell which Igari's behaviour is sincere and which it is just for the public. While his anger towards Kanou seemed to be authentic, it is possible that his impulse of fury towards Robinson was only to warm up the audience in the arena.

Kanji Igari is a large, imposing man with a notably strong chin, black eyes and black hair that is to ears length. In the first series of anime Igari was drawn slightly differently than in later episodes. His facial features were more distinct and angular. Also, there are large, visible scars across his face after his encounter with Sikorsky in the second manga series.

In the ring or arena, Igari always wears only ordinary sport briefs and long pro wrestling boots. In between his battles, he wears also a T-shirt. Outside the ring, Igari dresses quite elegantly because he always wore suits. In the first anime series, his suit was black, and since the third series he wears a light blue suit.

Kanji Igari appears at the very end of the Childhood Saga. There is a scene in which he is a guest in the household of Mitsunari Tokugawa, the owner of the Underground Arena. They both talk about the fact that there are fewer and fewer interesting and strong fighters. At one point Igari tells him about Baki, son of Yuujiro Hanma. The pro wrestler also tells him about various strong opponents that Baki defeated at the age of 13 and the arena owner is in shock. Suddenly Shuumei Kanou, Tokugawa's main bodyguard, appears behind Igari's back. Kanou tells the wrestler that he wanted to test his fighting spirit and whether he is able to sense the presence of impending danger. A tense atmosphere forms between the two fighters, but after a while Igari smiles and says that he decides to go home already, saying goodbye to Tokugawa. After leaving the arena owner's household, the pro wrestler meets a mysterious young man at the entrance gate. Igari immediately guesses this person is Baki Hanma. The young fighter tells the pro wrestler that if Igari wants to stand in his way, he will not give up. Igari with a grimace on his face says that Yuujiro created a terrifying child and leaves the place.

Igari appears in the Underground Arena Saga, but only in the anime version. In the manga, the following scenes do not take place. When a group of martial artists come to Mitsunari Tokugawa to talk about Baki's next opponent in the Underground Arena, at some point Kiyosumi Katou comes there and says that he wants to fight Baki next, and Igari comes shortly after him and starts talking about the fact that the choice of the next opponent should be based only on the strength of the challenger and it doesn't have to be a fighter of traditional martial arts, because the Underground Arena is designed to gather the strongest possible people regardless of their fighting style. Tokugawa tells that Igari is very right. The guests of the arena owner ask whether Igari is the next opponent of Baki, but the pro wrestler does not confirm this, and the martial artists decides to leave.

After leaving Tokugawa's house, Kato meets Igari and talks about who is gonna be the next opponent of the champion, but after a while they are attacked by martial artists who had previously come as guests to the owner of the Underground Arena. They start battling them to prove that they are better suited to fight Baki Hanma in the arena. After a while, however, some mysterious giant appears and starts knocking out every single one of them easily (he doesn't just attack Igari and Katou). Igari recognizes that the mysterious individual is Mount Toba, who turns out to be another opponent of Baki.

Kanji Igari takes part in the Maximum Tournament. His first opponent is the American kickboxer named Rob Robinson. Before their match, Robinson starts to mockingly provoke Igari in the locker-room, but the pro wrestler remains calm and does not react. A moment before the start of the duel, Igari has a tired and emotionless face expression. Katou, at his sight, says that Igari with this attitude will be destroyed in the battle. Kouhei Kuzumi, the second of the pro wrestler, also starts worrying and tells Igari that he will eventually throw in the towel, but when they enter the arena, the mood of the pro wrestler changes immediately. Igari seems to be charged with energy at the sight of a shouting audience. Robinson is trying to provoke the pro wrestler again, but this time Igari reacts.

At the beginning of the fight, Rob Robinson rushes with a series of blows at the pro wrestler, however Igari blocks every attack. At one point, the pro wrestler strikes with a powerful headbutt, after which the opponent temporarily lowers his guard, and then Igari catches him and performs a powerful suplex against Robinson. The American kickboxer is knocked out and the match is over. In the anime series, their fight takes a little longer. Igari also performs a technique called the Knuckle Arrow during the battle and uses backdrop three times in a row to end the fight instead of a single suplex as in the manga.

Igari's second opponent in the tournament is Kinryuuzan, the mighty sumo yokozuna.

He is meeting Tokugawa to introduce him to Tateoka. He is attacked by Sikorsky and is scarred and hospitalized. He later abducts Sikorsky to exact revenge, but it backfires and he is brutalized by Sikorsky.

A recovered Igari appears appears next to Jack after he knocks Sikorsky unconscious. While his men are picking up the phone booth that Sikorsky is in Igari mentions that he's thankful for Jack's proposal. What the proposal is gets fully revealed as a truck brings the now conscious Sikorsky to the Underground Arena, where he watches as Jack fights Sikorsky and as Gaia takes over and defeats Sikorsky.

He appears in Tokugawa's estate discussing his fight against Mohammad Alai that happened 30 years earlier, and the progression of Mohammad Alai's Boxing Style. He declared that Mohammad Alai Jr would defeat Baki Hanma. Later he notifies Jack Hanma that Yuujiro Hanma deemed Baki Hanma's challenge to fight worthy. Igari watches alongside Jack and the other fighters as Baki visualizes Yuujiro in the Underground Arena.

He appears alongside Tokugawa in the Tokugawa's estate.

He is mentioned by Kinryuuzan who says that he regrets his complete defeat to Igari.

Kanji Igari is a highly skilled wrestler who had a great battle with Mohammad Alai and at an older age was able to make it to the third round of the Maximum Tournament. During his fight with Mount Toba, another famous and powerful wrestler, he was able to fight him to a draw. Despite his skill he is not against using tricks or dirty tactics in order to win when up against more skilled fighters than himself, such as during his fight with Baki Hanma, when he hired an actress to pretend to be Baki's mother in an attempt to catch him off guard or when he kicked him in the balls. 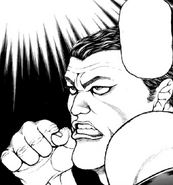 Kanji Igari being mentioned by Kinryuuzan in the fifth manga series.

Kanji Igari anime render.
Add a photo to this gallery

Retrieved from "https://baki.fandom.com/wiki/Kanji_Igari?oldid=30669"
Community content is available under CC-BY-SA unless otherwise noted.