Kozue Matsumoto (松本 梢江, Matsumoto Kozue) is a fictional character from anime and manga series of Baki the Grappler. She is Baki Hanma's schoolmate and the daughter of Kinuyo Matsumoto, Baki's landlady. In later parts of the series, Kozue is also his girlfriend. Her father fought and died in the Underground Arena.

Baki's girlfriend and her mother, Kinuyo Matsumoto, are Baki's landlords. Kozue is usually a quiet and quite shy girl. In the first anime season, she was presented similarly but seemed to be more energetic. She cares deeply for Baki but denies it when asked. She is disillusioned by Baki's violent life as an Underground fighter and begs him several times to quit. Though she still disapproves, Kozue better understands Baki's resolve after visiting Emi Akezawa's gravesite. After Baki's first tournament match, he reveals that he cares for Kozue. She became his love interest in the second series and makes love with him just before his fight with Ryuukou Yanagi, allowing Baki to become a "full man." It should also be noted that Yuujiro Hanma views her as an excellent woman for Baki. Yuujiro also states: "that little bastard got the best woman in the world" after she helped Baki cure the poison left by Ryuukou Yanagi. For some time in the series, Kozue and Baki have an incredible emotional bond, but later, it changes a bit. Probably because of Mohammad Alai Jr who started to mix up in their relationship at some point in the second manga series.

Though she appears to have a passive and soft personality, she has no problem asserting herself. When Kaoru Hanayama approaches Baki while with Kozue and questions their relationship as an inhibiting factor in Baki's fighting progress, he offers alternative situations for Baki to have sex outside of a committed, Kozue firmly confronts Hanayama and scolds him for disrespecting their relationship. She criticizes how men prioritize fighting and competition so much that the women in their lives are entirely excluded from consideration as significant factors in their decisions or how they are affected by their dangerous way of life. She goes as far as lightly kicking his leg each time she makes a statement.

Kozue can show great courage during various battles of Baki, wanting to motivate him or show her support. Moments before Baki fights Ryuukou Yanagi, and she wants to help in the fighting. Despite not understanding the level of danger and skill Yanagi possessed, her supportive nature and her courage as his partner are constructive for Baki in the long term. She also steps between Baki and Yuujiro while they are "flirting" during their fight, even scolding them for beating around the bush. Kozue notes that they continually stop and have chats during the fight. She calls them out on it, but it's because they are trying to make the fight last longer as they are fighting the one person on Earth who can bring out their full strength.

Kozue is a pretty girl with brown eyes and hair. In the OVA version, her hair was black and glowed slightly in dark blue color. Kozue has quite long hair, which she often braids. At the beginning of the first series, she had a fringe pulled on her forehead. During the Maximum Tournament saga, she removed her fringes up two sides, emphasizing the middle parting in her hair. In the second manga series, Kozue decided to pull her fringe to the side, uncovering her forehead, although, in anime, she does not show as much forehead as in the manga. She also stopped braiding her hair and started wearing a ponytail. In later chapters, she also started to wear her hair down more often.

She usually dresses in ordinary clothes without presenting some overtly striking style of clothing. She can often be seen wearing her school uniform. In the first two anime seasons, she was wearing a dark school uniform, but in the third season, she started to wear a school uniform with a white t-shirt.

Kozue is a girl with a pretty small physique, but also quite shapely. At first glance, she does not stand out, especially among other Japanese teenagers. Her height is average, and she is not much lower than Baki Hanma, who is less than 170 cm tall, so Kozue is undoubtedly about 160 cm tall.

Kozue is shown for the first time when Baki comes home after winning the Shinshinkai Karate tournament. Then it turns out that she is his neighbor and her mother is his landlord. When he's not home, Kozue feeds Musashi, Baki's dog. A scene is shown where Kozue brings Baki dinner from his mother and kindly points out that he hadn't been to school for a long time. At that moment, it can be seen that Kozue shows some signs of worrying about Baki. Then he talks to his mother about the fact that he's still just training and ignores any remarks about going to school.

Once on the way to school, Kozue asks Baki why he is still training so hard. He answers that he wants to be the strongest man in the world. Kozue doesn't take it seriously when a school boxing champion, Takayama, suddenly appears and interrupts them. Sometime later, Kozue notices a situation in which Baki leaves school in a mysterious and tasteful car. At that moment, Kozue doesn't know what kind of life Baki is leading.

Shortly before Baki fights Mount Toba, Kozue is kidnapped and abducted by school thugs. Her school friend, Mai, notifies the police about it, but the problem is ignored. Baki gets into action when Mai explains the case to him. Baki finds Kozue and the school thugs and then knocks them out and releases her. This theme only takes place in the anime series and never appears in the manga.

When Baki returns from the Underground Arena after winning a fight with Kureha Shinogi, he knocks on the Kozue's door late at night. He asks her to take care of Musashi temporarily, as he decides to go on a bit of a trip for a few days. Kozue is surprised, but she agrees. Baki doesn't knock on her door in the anime version because Kozue is already outside the house and pets Musashi when the young fighter comes.

Before the Maximum Tournament, Baki notices that Kozue is peeping at him as he is about to get in the car that will take him to the Underground Arena. Baki decides to tell her his secret and invites her to go with him. Kozue is shocked when they enter the Tokyo Dome together and go to the sixth floor underground. After a while, the surprised girl sees a locker-room full of martial artists, and the relaxed Baki informs her that they are his opponents. Kozue learns that he is a champion of the Underground Arena and then witnesses his conversation with his former challengers, such as Koushou Shinogi and Mount Toba.

When Baki defeats Andreas Regan, winning his first duel in the tournament, Kozue stops him in the hallway and asks why they all do it. Kozue explains to him that she doesn't understand the sense of brutal hurting themselves in the ring. Baki explains to her that every man at least once in his life has dreamt of becoming the strongest in the world, and therefore some people are still fighting to make their dreams come true. Kozue tries to understand Baki, but his "dream" still seems to be a terrifying thing for her.

Later, in the tournament, Kozue witnesses the fights that take place in the arena. At some point, she meets Jack Hammer in the hallway. He starts talking to her, and Jack seems to be trying to flirt with her. He even draws attention to her eyes. Baki notices the scene and gets angry. Eventually, Jack turns his back and walks away. It is unknown whether Jack liked Kozue or it was just an attempt to provoke Baki.

During the tournament, Kozue also sees Yuujiro Hanma, Baki's father, for the first time. At some point, Kozue accidentally overhears a conversation between Jack Hammer and Alexander Gallen in the hallway. It makes her extremely scared and worried about Baki's life. Out of concern for him, she throws herself around his neck and hugs him with tears.

Before the final fight in the tournament, Baki lies down on Kozue's lap and relaxes before his match with Jack. The moment before the final, Baki is having a meaningful conversation with Kozue in the corridor. The underground arena champion initiates a kiss with Kozue for the first time, showing his affection more openly. In the middle of the fight between Baki and Jack, troubled Kozue gets up from the audience and asks Baki to let go of the match and not hurt himself anymore. However, the girl's proposal does not convince the young fighter.

When Baki heals his injuries after the Maximum Tournament, Kozue goes on a first date with him. They talk about their kiss in the Underground Arena's corridor. Baki also tells her that he planned to invite her on a date for a long time. At some point, they kiss again. This is the first time they've done this under seemingly normal conditions. However, during the kiss, Spec, an escaped prisoner from America, tries to attack them. It is revealed that Baki knew Spec was there the whole time, as he glared at Spec while kissing Kozue. However, Spec was stopped by Kaoru Hanayama who took him away from Baki and Kozue. The girl doesn't even notice that something has happened, saying that the evening is lovely and peaceful.

When cries over Baki, her tears apparently interracted with Kaiou Ri's poison to cure Baki.

Kozue is a teenage schoolgirl of average built with no combat expertise. For a long time, she was incapable of understanding how men could practice martial arts and fight brutal duels with other fighters. Later, however, her level of forbearance increased significantly after witnessing many fights at the Kourakuen and during the Raitai tournament.

Anyway, it is worth mentioning that she was a great source of motivation for Baki at some point in the series and gave him a lot of strength. When Yanagi poisoned Baki, there was a scene in which he was lying half-conscious on the ground, and she began to cry out of fear for her beloved, bent over him. Her tears began to fall on Baki's face in large quantities and also fall into his mouth. Kaiou Retsu and Kaiou Ri stated that her contribution to Baki's later recovery could be pretty significant. From a biological point of view, Kozue's tears probably could not have had a significant effect during the healing of the poisoned body. Still, it can be said that her extremely caring love for Baki can significantly influence his condition. Once even Yuujiro Hanma admitted that he saw something special in Kozue and believed she would give Baki even more strength. To sum it up, Kozue does not have extraordinary abilities that she could use by herself, but she can provide great strength to her beloved. When they had their first sexual intercourse and formed an even stronger emotional bond together, Baki seemed to become much stronger. 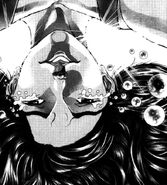 Kozue's cry in the manga.

Kozue Matsumoto in the OVA.