Mohammad Alai Jr (マホメド・アライJr., Mahomedo Arai Jr.), can be also romanized as Mohammad Arai Jr, is a fictional character from anime and manga series of Baki. He is the son of the famous boxer Mohammad Alai. He participated in the Chinese tournament alongside the Japanese/American team. Alai Jr claims to have perfected a martial art that only involves punches.

Mohammad Alai Jr is a rather kind person. He helped Kozue Matsumoto when she was crying. Later, he fell in love with her, however she really doesn't seem all that interested in him and she feels rather like a motherly figure towards Alai Jr. Mohammad is also a very determined person who keeps is capable of getting back up even after horrible defeats.

During his fights, Alai is arrogant and very serious. He claims he has perfected his martial art. However he has one major weakness: unlike other fighters, he was not prepared to face the possibility of his own death in the fight. He was defeated by Jack Hanma who showed him no mercy.

At first, he didn't take the Hanma family seriously at all. When he was a little kid, he decided to box the big adult talking to his father for fun. Yuujirou Hanma, although showing restraint, sent him flying with only a flick. Alai Jr also asked Kozue, Baki's girlfriend, to marry him. Finally, after losing a fight to Baki, he broke down and started crying, breaking both his confidence and fighting ability. He seemingly accepts her rejection and his loss. After that, he was never shown in the series.

Mohammad Alai Jr is a tall African-American male. He's a type of a handsome man with a muscular build, yet is considerably slim for his strength. He can be seen wearing a pair of white boxer shorts in his matches, otherwise he usually wears casual clothes, he wears formal clothing when having coffee with Kozue Matsumoto.

Mohammad Alai Jr is the son of the famous Mohammad Alai (a loosely fictionalized version of the real-life Muhammad Ali), who is considered to be one of the greatest boxers to have ever lived. He was first seen in a flashback of an account being described by Alai Sr during a news interview, where the pre-school aged Alai Jr is introduced by his father to Yuujirou Hanma to his home to see him. Alai Sr expressed his hope that his son would go on to create a boxing style that would not only be capable of prevailing against boxing and/or striking techniques, but also techniques of wrestling and/or grappling. Alai Jr abruptly interrupts his father by showing his natural talent and proficiency at boxing with a sudden flurry of jabs and punches against Yuujirou - much to the latters' amusement. Exhibiting a rare moment of patience, he allowed the young boy to land a few of his blows on the face, before bestowing an educative moment by giving the young kid a taste of defeat and his own level of strength by flicking him on the forehead with such force that the kid rolled back and hit the wall several feet away.

Five years prior to New Grappler Baki and Alai Jr left his father in a catatonic state. After Baki Hanma became hospitalized after his battle with Ryuukou Yanagi, Alai Jr ran into Kozue Matsumoto who was upset about Baki's condition. Alai cheers her up with a toy that he carried as a good luck charm. He would go onto have a sparring match with Dave, a fighter who he easily dominated.

He would go onto participate in the Chinese Tournament alongside the Japanese/American team. During the tournament he showcased his amazing skills in battle after defeating Kaiou Han in two punches.

Godlike Clash of the Kids Saga

After the tournament Alai would challenge many of Baki's friends in order to challenge him. He faced off against Gouki Shibukawa where was able to easily defeat (due to Gouki not treating it as a life or death match). He was able to defeat Doppo Orochi despite having slight struggle against him. After his wins over Gouki and Doppo he decided to pick a fight with Jack Hanma, since he was the last opponent Baki faced during the tournament. Jack took their match seriously and gave him his first brutal defeat. Then Gouki and Doppo decided to have a rematch when Jr hasn't fully recovered. They wanted to go all out on Alai Jr who was too prideful to decline. Finally, he was pummeled by both Gouki and Orochi who likewise put their life on the line in their matches.

After his fight with Jack, who makes Jr regret his no giving up attitude, almost everyone he defeated before come back to punch his face in since he is too wounded to fight back and too prideful to give up, even Mohammad Alai, his own father decided to pick a revenge match on him when he still needed crutches.

Despite his defeats he attempted to challenge Baki, believing his style of martial arts was better. He was almost killed by Baki during the Kourakuen Underground Arena. At the hands of Baki who then proceeds to give him a concussion from a right hook, then a kick to the crotch causing him to writhe in pain which leads to Baki stopping on his face repeatedly until he cannot fight anymore. When Baki has him by the chokehold in attempt to break his neck until Alai Sr. stepped in to prevent Baki from killing his son just by sucker punching Baki off of Jr. However, later Baki said it looked easy but if Jr punches landed on him, he would have lost, which is why Baki made it quick. He is last seen crying after he is defeated by Baki.

He possesses some of the fastest reflexes and has destructive power in his punches. Alai has rapid footwork which startles his opponents. A few fighters comment on how he moves like a dancer. His footwork is one of his biggest advantage as he can close into punching distance with speed and grace. He participated in the Chinese Tournament alongside the Japanese/American team. During the tournament, he showcased his amazing abilities as a fighter. He defeated Kaiou Jo without being hit, then he defeated Kaiou Han by cutting his face with a fist and with a few punches in the face. Alai Jr defeated Gouki Shibukawa with punch in the jaw and defeated Doppo Orochi with a few punches despite being dominated by Doppo's skill.

He claims to have perfected a martial art that only involves punches. One good hit delivered by him is an instant knock-out against pretty much everyone he faced except Jack, and even Jack faltered a bit. But he also using kind of kick technique. He kicks the ground to boost his punch with the power of earth. Unfortunately, he found out the hard way that his boxing style has major flaws like his father. Junior hoped to correct these problems by adding the kick to to his move set but it was not meant to be as he was defeated by Baki Hanma.

He is a great fighter as long as his opponent doesn't treat the fight as a serious life or death combat. If the rules are out or he faces a merciless fighter like Jack he doesn't stand a chance. Then he was beaten in a rematch with Gouki who didn't hold back, breaking his finger. Then again being defeated by Doppo in a rematch fight, where Doppo didn't hold back. Doppo mercilessly broke his hand and leg. 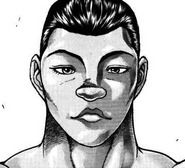 Mohammad Alai Jr in the manga.

Mohammad Alai Jr as a child.