Musashi Miyamoto (宮本 武蔵, Miyamoto Musashi) is a character and the main opponent from manga series of Baki-Dou. The legendary samurai Musashi Miyamoto is said to be the strongest of his time and possibly the strongest samurai ever. He was cloned from tissue in his spine, and Sabuko Tokugawa infused that empty clone with Musashi´s Soul, thus giving him his former memories and skills.

Musashi is extremely straightforward. He acts more or less like an ambitious fame-striving artist of martial arts, who desires the fame and glory he once had. Unlike any of the other fighters, Musashi is 'alone' and mentally-distant from the rest of the world, even more so than Pickle himself. Unlike him, however, Musashi was unable to adapt to the modern age. The samurai's distorted mindset is seen numerous times across the fourth series of the manga, pointing to the fact that Musashi doesn't indeed feel any semblance of sympathy for others, and only considers sparing those who he pities. He hardly shows much of any concern on who he injures or maims those unlucky to challenge him.

In a similar fashion to Yuujirou Hanma, Musashi very rarely goes all-out and instead chooses to mock most of his opponents, which inadvertently sprouts out the hate other characters began to bear towards him. In the fight between him and Pickle, he says that it gets very dull and boring when his enemies and opponent goes down within a single hit, as for Pickle; Musashi can slash him as many times as he wanted to. That said, he does have a code of honor and will only respond to an opponent's level of force with an equal level of force. Anyone who fights him one on one, he will follow the "rules" as his opponent dictates them. If his opponent explicitly won't use lethal force and is not trying to kill him, then Musashi will likewise do the same and only defeat his opponent while not killing them (Doppo Orochi and Baki Hanma only wanted to challenge him to a fight unarmed and while it was a no rules fight, they weren't trying to kill him, merely risking their lives. Thus, Musashi just knocked out Baki and Doppo). When a police officer challenged him with a gun and stated his intent to kill if Musashi moved then Musashi killed him without hesitation. Even then Musashi paid respects to the man by kneeling down to his fallen body, realizing that he was just doing his job as an officer of the law, while later telling his fellow officers to be at peace as their comrade died in a proper contest without fear. He will, however, show no mercy to multiple opponents attacking him with the intent to kill or do serious harm to him as he sees it as "war" not a "contest".

He has an incredible sense of danger, as he knows when a battle is life-threatening or not too. Because Yuujirou wasn't really trying to kill him, in this case Musashi probably treated the fight as another chance to train, one of his repeating motifs. So long as he doesn't consider a foe as trying to kill him, he can simply treat the fight as a means to practice, which is probably why he lost to Izou Motobe as he forwent multiple opportunities to kill Motobe so as he could experience his skills and learn from it. As such, Musashi wasn't really putting intent to kill in his attacks against Yuujirou because he was using the opportunity to try and perfect his previously unfinished style against such an impossible strong enemy. While it was a blow that could kill Yuujirou, it didn't have the intent to kill in it, so Yuujirou didn't auto-dodge it as it was within the realm of what he could face head-on.

Musashi can also be extremely frightening to his opponents. He has become among the very few things that can frighten Pickle into running away in fear due to his fighting style making the caveman see him as a giant wasp.

Musashi is a tall well-built man with scars on his body and extremely thick wrists for a man his size. He acquired a new scar on his mouth from his fight with Izou Motobe. He has wild black shoulder length hair similar to the style of Yuujirou Hanma's. His eyes look nearly feline-like and he has facial hair. His face looks like a cross between a lion and human, especially when he's positioned sideways sitting down. He has a constant dead-eyed look. When he's successfully cloned, he dons a blue Gi and leather sandals. When in a proper fight, he slightly changes his look by rolling his sleeves up to his shoulders, wrapping bandages around his torso and wearing a bandana.

Once a nation-wide proclaimed legend who was praised to no end as Japan's greatest hero, Musashi Miyamoto was brought back to life into the modern era with the mixture of extremely advanced science and voodoo magic. Shortly after getting accustomed to the fact of his revival, Musashi is settled into a residence with Tokugawa for an unknown period of time. While being hosted by the old man, Musashi is also given numerous invitations to fight the new world's top champions. Seeing this as an opportunity to reclaim his lifetime's glory and fame, Musashi isn't one bit reluctant in his decision to cut down the strongest. Throughout the whole span of the fourth series, Musashi unleashes a bloody campaign on all "Gods of Martial Arts", which was only stopped after Tokugawa's sister released his soul from his clone's body. As of now, Musashi's clone's body is kept safely in the same lab he was created. While Musashi is out of condition and would probably not be appearing any time soon, it is hinted at his possible comeback in the future of Baki's world.

Musashi is renowned for his skill in swordsmanship. He is the creator of Niten Ichi-ryuu (Two Swords as One) and the founder of the legendary Niten Ichi-ryu school, which is a sum of all his skills and philosophies. Even at age 17 Musashi often fights as a one-man army and wins battles mostly unharmed. When he was 58 Musashi was still undefeated and became able to use his visual swords endlessly.

He is able to swing with such force that he completely destroys a sword that has been in use for more than 60 years. Musashi also broke Retsu's 9-section whip with his hand. He has amazing grip strength, comparable to Kaoru Hanayama, able to crush bamboo, was able to lift Baki and Retsu Kaiou who weighed more than 100 kg with one hand effortlessly and lift Yuujirou Hanma up with both his hands. When Yuujirou took hold of the blade of his katana and knocked him out with a palm to the face, he is sent flying but his grip on the sword remains strong enough that Yuujirou is sent flying with him. Musashi is even able to cut through the skin of some of the toughest fighters in the series (Baki, Hanayama, Pickle and even Yuujirou himself). Musashi himself is immensely durable and has a high tolerance to pain, taking many blows from Retsu and his whip (which send nails and teeth from the ground on his face and even hit him to his eyes) and still managed to defeat him, endure punches from Hanayama and even from Pickle (as he survived his lean forward push which denting him to a wall) and Yuujirou. His speed is also incredible: he was capable of outrunning vehicles, or shorten the distance between his opponent in the blink of eyes and surprise them unseen. In fact, Musashi is so fast that he is able to make an afterimage or, like Yuujirou, disappear from one place and appear on another, as if it was some sort of teleportation. In addition, he posses one of the fastest reflexes from all fighters from series so far: he was able to dodge and even cut bullets in half in mid-air, counter fast opponent in the paper distance and dodge even punches from the fastest fighters like Baki.

His skill as a swordsman is, of course, also extreme. He was able to counter Retsu Kaiou's Xiaoli, and kill him with a slash to the stomach. With his superhuman strength, he could cut through Pickle's flesh and cut through Motobe's aramid fiber chain-mail. Even without a sword, Musashi maintains the ability to cut using his own hands. They are able to cut through 8 bodies and perfectly split a revolver in 2 along with the officer holding it, demonstrating no decrease in potency. Musashi can simulate a sword strike, without having moved an inch, with such accuracy that the people he strikes can feel the nonexistent blade cutting through them and feel it fresh in their mind multiple minutes after. It is powerful enough that Musashi can use it on people who are unaware of his presence, and they would still notice it.

Musashi's swordsmanship is so brutal that anything less than the perfect weapon will break upon use. He can extend this to people as well: by grabbing them and swinging them like a sword, he is capable of inflicting massive internal damage.

Aside from his swordsmanship, Musashi also seems to have acknowledged of martial arts of his era and many of them mastered, as he can kill people with a single punch, yet relied on his swordsmanship most of the time. His intelligence is very high; in fact, Musashi is a battlefield genius. He is extremely perceptive, thoughtful and has immense wisdom over the arts of war, especially sword fighting. He knows every sword fighting technique there is and many others, which can effectively counter just about every other fighting style in the series. He was so skilled with the sword and in battle, that he learned how to cut people without even using his swords and his mind can pick up the signals of people's brains when they prepare to attack. 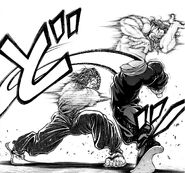 Musashi slashing through Retsu's midsection with his sword.

Musashi's exceptional grip strength, which causes Yuujirou to be sent flying with him after punching Musashi in the face. 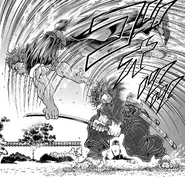 Musashi lifting Yuujirou off the ground and throwing him around. 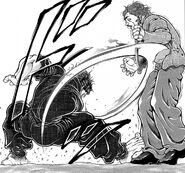