Pickle (ピクル, Pikuru) is a fictional character from the Baki the Grappler franchise. He is a primitive man found perfectly preserved in a saline rock formation (hence he is 'pickled'). This giant humanoid lived originally in the Jurassic/Cretaceous era.

He has never been heard to speak intelligibly so far in the manga. Despite not being intelligent enough to speak, he has his honor and has never wanted to eat a creature that doesn't fight with him. He also gave back Katsumi Orochi his arm after tearing it off and prayed in front of him. He is usually seen crying after fights with ones he deems worthy to fight, as an act of respect for his opponents. He was never afraid of any beast except for a single being: a wasp. When he is faced with difficult fights, his opponents may become resemblances of wasps in Pickle's eyes, causing him to either back away or run away (as seen in the fight with Musashi Miyamoto). However, it is not being stung that Pickle fears. Long before his arrival into modern age, Pickle managed to eat a wasp. As a result, his mouth begin to burn intensely from the wasp's venom. From this, Pickle began to fear them as they had the capability to harm him even after they had been defeated. This was also the same quality he saw in Jack Hanma causing Pickle to be hesitant to attack, thus saving Jack's life.

Pickle has also seen to possess a very primitive behavior, such as raping a woman reporter who made the mistake of getting too close for an interview. Even refusing to stop when being assaulted by various security guards. Pickle showed no guilt or regret, because at this point in the story, Pickle had no concept of right and wrong. He only knew that there was no longer anyone like him, and that he needed to procreate to avoid the complete extinction of his people.

Pickle's intelligence varies from animalistic to slightly above average. Since Pickle originates from the Jurassic Era, he mostly relies on his primal instincts and the things he learned when he was younger, similar to an animal. However, after being brought out of the ice he remained frozen in for millions of years, Pickle was forced to live in the Modern Era, where technology, intelligence, and complex techniques dominate. Albeit slowly, Pickle was able to adapt to the present day world and even learned the basics of some martial arts such as Aikido. Pickle's cognitive skills and perception may seem very primal at first, but are actually as complex as an average human's - imagination and understanding are some of Pickle's most notable traits, which confuse all of the characters in the series.

Pickle does not resemble any form of primitive man (Neanderthal or Cro-Magnon) or even modern humans. And although he predates humanity by millions of years, his proportions, size, bone structure, and posture are similar to that of a sahelanthropus. This has led some to believe Pickle is a missing link in the evolutionary chain.

He stands over eight feet tall and possesses a level of muscular development equivalent to Biscuit Oliva. Pickle has dark shoulder-length hair and a youthful face, giving him an almost innocent appearance at times. This is offset by his exaggerated upper and lower canines, giving him a 'fanged' appearance, and his nails which resemble claws. Pickle has extra-thick neck vertebrae which he evolved from walking in a quadruped stance. He also seems to be able to dislocate his jaw, allowing him to open his mouth to an enormous size. Pickle's forearms, lower legs, and neck are all overdeveloped to the point where he is nearly unable to wear modern clothing. Pickle later was missing his left ear, after it was bitten off by Jack. He also bears a vertical scar in the center of his body where he was cut by Musashi.

At first, Pickle was naked but after his fight with Kaiou Retsu, he starts wearing simple underwear. In the fourth manga series, he started to wear green ragged shorts.

Pickle was shown to be born in the Cretaceous Era as he was Fighting a T-rex and survived the meteorite that sent them to extinction.

Pickle's muscles are so developed and strong that he withstands three 9 mm. shots to the stomach at point-blank range, none of which penetrate his abs although they make him slightly bleed, and indeed he believes the man who shot him to be engaging in some sort of rough-house 'game'. He killed and ate T-Rexes without the use of weapons in his prehistoric life, and is one of the most blatantly superhuman characters in the entire manga. His canines are strong enough to eat dinosaurs and tear their flesh. Pickle makes any animal run away in fear after seeing him (except for a Siberian tiger, although it was starved for several days and considered anything food at that point).

Pickle has enormous raw endurance and primitive durability which is above everyone except Yujiro, whose strongest body part is his neck. Because he used to walk on four legs, Pickle's neck has developed to be incredibly strong, which makes it extremely hard for him to have a concussion in his brain. Kaiou Retsu attacked the back of his head with all of his strength and it didn't even faze him, and later when mindlessly assaulting him, Pickle took all his blows without so much as dodging or even trying to protect himself and remained completely unharmed. Jack Hanma punched his chin with all his power, and while it was strong enough to send Pickle, who weighs about 200 kg, flying through the air, it still didn't damage him. He also endured Katsumi Orochi's attacks, including the Hitless Blow, without even bleeding. Pickle even withstood multiple slashes from Musashi Miyamoto with just a few light cuts as a result. Even on spots such as the knees and elbows (which are some of the weakest parts of the human body), he didn't take any serious injury. However, Pickle still lost after he ran away when he imagined Musashi as a wasp. One of the only times he was legitimately hurt was due to a direct hit to the crotch by Baki, and even then he got back up almost immediately.

His herculean strength has also been shown in various occasions, being capable of withstanding a strength test with Yuujirou Hanma himself, resisting a charge from Kaoru Hanayama, sending Baki Hanma flying through the Kourakuen arena with a single kick, chopping a leg from Kaiou Retsu after beating him, defeating Jack Hanma two times with only a few punches and breaking all of his teeth including his jaw too, jumping from wall to wall at inperceivable speeds in the same fight, and pulling a giant crocodile the size of a small dinosaur through a sewer tunnel (despite it supposedly was not big enough to contain said crocodile), which would've require the strength of a bulldozer. Despite being a primitive man, Pickle can sometimes be seen using tactics like using rocks and trees to make jumping for himself easier so as to dodge Jack's attack, or using a Jujitsu technique to defeat Baki (although, in the past, he did use chokeholds and grappling techniques to defeat dinosaurs). During his fight with Baki, Kaoru Hanayama noticed that Pickle is able to master the power of imagination and realization.

While he is capable of learning, Pickle is still mostly primitive. Due to living the most of his life in a wild era filled with nothing but creatures who used only their brute force and monstrous size to win battles, Pickle's biggest weakness is his sheer lack of technical skill. Experienced martial artists (even those who're physically inferior to him in all most every regard) have still managed to give Pickle quite a hard time due to this flaw. However, his sheer strength and durability practically nullified this weak point.

Pickle in the manga.

Pickle fighting against an enormous crocodile.

Pickle lifts and tosses around a Giant Triceratops. 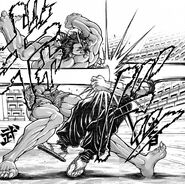 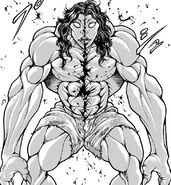 Pickles is severely cut by Musashi. 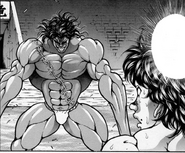 Pickle performing an uppercut against Jack.