Baki Wiki
Register
Don't have an account?
Sign In
Advertisement
in: Characters, Male, Way of the Void users, Japanese characters

Ryuukou Yanagi (柳 龍光, Yanagi Ryūkō) is a fictional character from anime and manga series of Baki. He is a Japanese convict who escapes from being enclosed in rocket-proof special glass. The smallest of the convicts physically, he is later being shown as the most deadly. He is the only convict whose crime is known, that he killed a dozen men in prison as a test bed for his new skill.

He is known as "Yanagi the Poisoner" (猛毒柳, Mōdoku Yanagi).

At first, Yanagi seem's to be a very stoic person, but he actually likes to use psychological mind games during his battles, he behaves towards his prey like a cat toying with a mouse. Yanagi often asks his victims if they know what the world's most poisonous gas is, before he uses his Vacuum Palm techniques on them.

He is also a very proud and stubborn person; even after getting his leg impaled and his poisonous right hand cut off in a crushing defeat at the hands of Izou Motobe, he still refuses to give up or admit defeat. Yanagi also showed to be quite brave; for example, when he spoke to Yuujirou Hanma after his fight with Motobe and told him that the one who decides who wins or loses a match is not him (of course, Yanagi acknowledges that he's the strongest creature in the world). But that would of course lead to Yuujirou to brutally and nearly kill Yanagi with one move.

His mental fortitude is extraordinary. He did a very painful procedure of dipping his right hand into a mixture of extremely lethal poisons, infusing it with his hand to make it capable of transmitting the lethal poisons to his opponents when he strikes them with it in battle. It proves that he is willing to go to great lengths for his fighting path.

He is also proud of his country's tradition's. When he was asked by Mitsunari Tokugawa why he came to the Underground Arena, Yanagi responded that anyone in Japan who lives by Bushido knows about the coliseum. His pride is also seen in his fight against Hector Doyle, another one of the five escaped death row convicts. After blinding him with a punch in the eye with his Poison Hand and putting him in a tight spot, Yanagi pulled out a katana and said that in Japan, any samurai that lost their pride had their head chopped off, claiming that Doyle has lost his pride as well. This was a reference to how Doyle admitted defeat and became friends with Katsumi Orochi despite being a death row convict. Yanagi attempts to cut off Doyle's head shortly after he finishes his speech, but Doyle blocks it with his arm and escapes by throwing himself into the ocean.

He is a short middle aged Japanese man with a muscular build and black hair that's slightly turning grey with age. He always bears a somewhat melancholic look on his face. He wears the typical clothes given to all prisoners in Tokyo, with the exception of his pants, which are beige colored instead of black.

In the Revenge Tokyo manga, it was shown that after suffering his defeat the left side of his face was replaced with acrylic and his missing right hand was replaced by an iron hook.

In his younger years, Yanagi was a student of Kunimatsu where he started perfecting the technique known as Poison Hand, for example. He was eventually imprisoned for unknown circumstances, but unlike the other escaped convicts, his crimes prior to imprisonment were not the reason he was put on death row; it was because he used fellow inmates to practice his Vacuum Palm techniques, killing them in the process.

He was imprisoned in a bulletproof glass chamber that can endure the force of a rocket. The prison guards begin to talk about him. At one point, Yanagi gets up and joins the conversation. After a while, he destroys the glass with his Vacuum Palm technique, murders the guards and runs away. During a moment of synchronicity, Ryuukou Yanagi and four other death row convicts escape their prisons and heads to Tokyo for one purpose; to know defeat.

After his arrival in Tokyo, Yanagi meets Gouki Shibukawa, an old jujutsu master and his former rival. They meet at Shibukawa's house and talk about their former clash. It turns out that it was Yanagi who once deprived Shibukawa of his eye. At one point, Shibukawa challenges him to a battle and suddenly the fight begins. Yanagi throws a jug full of hot tea at him and in the blink of an eye leads to a situation where he can easily kill Shibukawa, telling the old master that this is another defeat (but he doesn't hurt him).

Later, Ryuukou Yanagi and the rest of the convicts arrive in Kourakuen, where they meet with five competitors of the Underground Arena. Mitsunari Tokugawa, the owner of the arena, introduces themselves to both groups and the fighters decide about the start of the war between the convicts and the competitors from the arena.

When Baki Hanma escapes from school, he is attacked by Yanagi, who camouflaged himself by dressing up as a school gardener. The Japanese convict pulls out two sickles and begins to rush at Baki. The young champion avoids all of Yanagi's dangerous attacks. At one point, Shibukawa unexpectedly appears and throws a jug with water towards the convict, warning him that the water is hot and referring to their last battle. It turns out that the water is cold, and the deceived Yanagi is attacked by the old jujutsu master. Shibukawa joins forces with Baki against the dangerous convict, but eventually Yanagi decides to use his special technique called Vacuum Palm. In this way, Baki is defeated, Yanagi explains how his skill works, and then flees the scene when he hears that the police appear.

A while later, he shows up to challenge Baki again. They proceed to have a slap fight, until Sikorsky shows up. Realizing Baki is too strong for them individually, they team up to fight him.

In Itagaki's retconned oneshot Revenge Tokyo!! while he's back in imprisoned he manage to survive with only half of his face missing and his right hand replaced with a prosthetic hook after it's been cut off by Motobe. When a group of prison guards who were supposed to escort Yanagi to a mental facility — one of the prison guards proceeds to provoke Yanagi by taunting him, which proves to be a fatal mistake, who then proceeds to gruesomely massacre the entire escort before escaping confinement.

The smallest of the convicts physically, he is later being shown as the most deadly. He is the only convict whose crime is known, that he killed a dozen men in prison as a test bed for his new skill. He uses a special martial art called Way of the Void (空道, Kōdō). In this style he practices Vacuum Palm, Whip Strike, Poison Hand and many others. Yanagi is also very good at using weapons, such as a rope sickle during fight with Baki Hanma, or the Bagh Nakh during the fight with Gouki Shibukawa. He also used a katana to nearly cut Hector Doyle's arm off. His skill in the Way of the Void is so great that his master Kunimatsu considers him as his most skilled student, despite having many students from all around the world, and calls him a genius. By human standards, however, he is strong and skilled as his weight lifting training is so extreme it ruined his molars.

With his Vacuum Palm technique, he can knockout his opponent with oxygen, or rather lack thereof. His palm allows him to vacuum out oxygen from the air that his opponent breathes by smacking it onto their face. The testament of his mastery in manipulating air and human body however, was fully shown during the prison break in his debut chapter. Yanagi killed a warden with a reverse variant of his Vacuum Palm technique, by blowing air directly into a warden's ear which then proceeded to gruesomely eject his entire brain matter out.

He can make his body as fluid as a liquid to enable it to act as a whip, letting him stretch and flex his limbs like such for devastating slaps. It's so powerful that it can easily tear off an opponent's skin and expose their musculature. After using it on Baki during their rematch though, Baki tells him that Yuujirou also taught him that technique as a child, easily recalling how it's done and doing it right back at him. Unlike Baki, Yanagi actually does feel the immense pain the technique causes.

Despite his skills, Motobe points out that his reliance on weaponry has weakened his fighter's senses. Furthermore, his reliance on the Poison Hand also turned out to be a big weakness as Motobe managed to chop his right hand off and then defeat him. 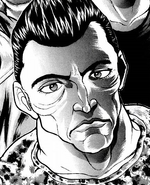 Ryuukou Yanagi in the manga.

Ryuukou Yanagi in the OAD.