The Seiken is a karate practitioner's straight punch, shot from waist. Punching techniques in the karate are called tsuki or zuki. Seiken is a punch with the first two knuckles. The Seiken punch is a typical technique for all karate fighters in Baki series.

It is one of the most versatile and powerful weapons of Okinawan karate. To make a proper fist, the fighter has to start by extending all four fingers and pressing them tightly together. The first time Seiken was used in the series could be during the scene in which Doppo Orochi used his karate punch to test Baki Hanma's reflexes in the first chapter of Baki the Grappler.

The Seiken is such a useful technique that it can be even a finishing blow. For example, the user can perform it with a rapid succession in a barrage-like attack. Doppo Orochi did it during his fight with Yuujirou Hanma in the first series of the manga, and it was strong enough to left shapes on his chest, but it turned out that it was not enough to beat Yuujirou. In his fight against Kaiou Dorian, Doppo's Seiken was powerful enough to break his rib cage. Doppo was also seen using the Seiken against Rikigouzan, striking the wrestler's chest. After a moment, it turned out that Rikigouzan had an internal hemorrhage due to the strength of the punch. Doppo Orochi is the one who generally using the Seiken. It's kind of his signature move.

Doppo using the Seiken to test Baki Hanma in the first chapter. 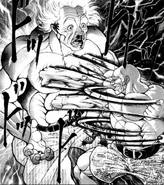 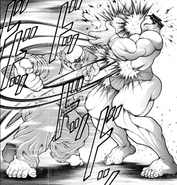 Doppo using the Seiken against Rikigouzan.
Community content is available under CC-BY-SA unless otherwise noted.
Advertisement