Almost nothing of his personality was shown but he appeared to get agitated when he could not hit Yuri Chakovsky.

Not much is known about Dinoy's past except that he is the Muay Tai champion of Thailand. Yuri Chakovsky became so strong that no one would spar with him except Dinoy, so Yuri's trainers had to fly Dinoy all the way to Japan so that he could fight him. Baki shows up to witness the ending of the fight where Dinoy is not standing the slightest of chances. He is defeated by Yuri with little effort and has not been seen since.

Dinoy is an expert fighter in Muay Thai, he is the champion of Muay Thai in Thailand and no one has tied with him. Dinoy was able to cut Yuri's boxing glove with his elbow and proved to be quite fast. He is ultimately no match for Yuri though. 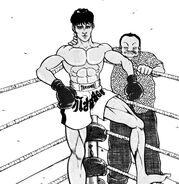