Shobun Ron (龍 書文, Ron Shobun, Chinese pinyin: Lóng Shū-Wén) is a fictional character from manga series of Baki. He is an user of Iai Kenpo and an unbeaten fighter of the Chinese underground area hired by Kaiou Kaku to make the Chinese team. He hardly speaks Japanese and is mainly silent.

Shobun is a very calm and stoic person. After entering the arena for his match with Biscuit Oliva he is seen meditating. He also never got excited or had an adrenaline rush while fighting Oliva up until the point in the match when Oliva started copying his main technique, the Hand Pocket, at which point he started relentlessly attacking.

After being caught off-guard and headbutted by Oliva thrice, he finally snapped completely and let out a loud "kyah!" and angrily attacked Oliva's abs, breaking his fingers in the process. Despite this, he was shown to have great elegance and great pride in his style as he put his hands in his pocket while he was falling down in defeat after the fourth headbutt he received from Oliva.

Shobun is a tallish, well-dressed, athletic asian middle-aged man with muscular build. He has short black hair, a very thin moustache and very thin eyebrows. He always keeps a non-enthusiastic look on his face, which helps him trick the opponent into thinking he doesn't care about the match by combining it with his Hand Pocket technique. He is dressed in a white Chinese suit and greyish boots.

Shobun was born in Xua Li Mu, Taiwan. He met his master Shikai Bun when he was 9 years old and started training. He won all the Taiwan Raitai tournaments he participated in from age 15 to age 19. At a certain point a Taiwanese mafia called "The Crow's Circle" offered him a big sum of money to become a member. Shortly after joining he started fighting in the underground for his mafia and became very feared and famous for his fighting skills, managing not to lose a single underground mafia fight in 25 years. Adding the 4 years of participating in the Raitai tournaments, this means he has been fighting for almost 30 years and hasn't lost a single match in his life (up until losing to Oliva).

Shobun is a very skilled fighter. He uses a lesser-known martial arts style known as Iai Kenpo. The most utilized technique in this style is the Hand Pocket, but it is also shown to have some more common techniques such as the Nukite, which Shobun used on Oliva. His nukite has proven to be strong enough to stab Oliva with a spear hand strike and makes him bleed, but it didn't work later when Oliva tightens his body for real.

He is shown to have incredible strength and endurance, managing to stop Oliva's strike with a single hand and show little to no pain despite the ground under his feet breaking from the impact. He demonstrated his endurance again by tanking a powerful double strike from Oliva to his shoulders and then immediately proceeding to counter-attack and also by getting up shortly after getting knocked down by Oliva. He also demonstrated great recovery speed as well as great attack speed, evident in his furious barrage of attacks he performed after Oliva copied his Hand Pocket technique. Of the defeated Kaiou he is the only one that put up a decent fight and even threatened Oliva. 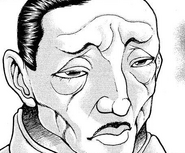 Shobun Ron in the manga.