The fighter uses his big toe to strike directly into the opponent's vital points. He also uses his toe to grab his opponent's hair or beard and use it to attack.

Kaiou Retsu is the best user of this technique. He once used this skill during the training match and he killed an other fighter. After that, Kaiou Ryuu forced him to wear a heavy shoes, and Retsu can only take it off if his opponent is worthy enough. Retsu used it to fight Baki Hanma in the first series, accidentally awakening his "Hanma spirit". In the second series, Retsu used it again to fight Kaiou Jaku. He managed to tear off most of Jyaku's beard. In the third series, Retsu used this technique to pull Pickle's hair and hit the back of his head with all of his strength. But he couldn't knock Pickle out with this. 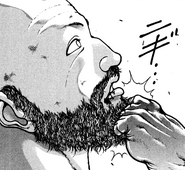