Shunsei is shown to be cold-blooded, similarly to his father. While discussing the Chinese team's strategy after their first loss (despite claiming they will win by a clean sweep), Kaiou Kaku said he will fight the other matches, but Shunsei interrupted and said that each person should get a kill and said that by killing all five of them no one would care for them. He is also shown to be arrogant, claiming victory immediately after his father agreed on Shunsei's terms. Like most of the Kaiou, he is confident that he is the best and no foreign martial artists can defeat him. Unfortunately for him, he underestimated Baki Hanma by a pretty large margin.

Not much is known about him, aside from the fact that he is Kaku Kaiou's son and that he was trained in Chinese Kenpo. It is unknown what exactly Shunsei feels towards his father, but he still comes out to participate in the Raitai Tournament at the request of his father. The two are shown to have a seemingly very close but distant relationship between father and son. After Shunsei's loss to Baki, Kaku says that he can't really be his son because his son would never lose and tells him to quit martial arts.

Shunsei is a tall and muscular man with thick black hair and a heart-shaped face. He always bears a strange smile on his face and his eyebrows always appear angry, giving him a sinister expression. He wears a jacket and pants which both contain greatly detailed depictions of trees on them.

The extent of Shunsei's abilities is unknown, but from what can be garnered from his short fight with Baki Hanma, he seems to be quite fast, but slower than Baki. Despite being called the "Invincible Beast" he was easily given a concussion by Baki with just one punch to the jaw, implying that he had never faced anyone as tough as Baki and easily won his matches and also implying that his neck isn't strong enough to handle punches from fighters that are on Baki's level of strength. 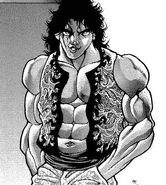 Shunsei Kaku in the manga.