Sikorsky (シコルスキー, Shikorusukī) is a fictional character from the anime and manga series of Baki. He serves as one of the main antagonists of the Most Evil Death Row Convicts Saga. Sikorsky is a Russian convict who escaped from Evans prison in Russia. To do this he had to climb up the smooth surface of a missile silo since the prison was converted from an old ICBM base.

Sikorsky is a ruthless Russian killer. He is very deceptive and likes to play with his opponents. One of his methods is pretending to be outmatched only to attack when his opponent's guard is down. Kanji Igari even called him a "tanuki", which means a raccoon dog in Japanese. It's a metaphor that refers to Japanese superstitions about the shapeshifting of raccoon dogs.

He seems to believe if someone can't fight without being told "ready go" then he isn't a true fighter and should not call himself a martial artist. This can be seen in the example of his encounter with Tateoka. Sikorsky also seems to disrespect pro wrestling and thinks it's a useless fighting style. He stated that pro wrestlers can't fight without a gong and an audience, after brutally wounding Igari with his flesh-cutting knuckle strikes. Ironically, he has used the Dropkick, a very common wrestling move, multiple times in his fights.

But there has been moments where Sikorsky shows to know fear. First by sweating nervously from meeting up with Yuujirou Hanma (even though he had the bravery to insult him during their conversation and prepared to fight him). The second time Sikorsky shows fear was when he got pummeled almost to death in his fight against Gaia, reduced to a coward he desperately begged to the mercenary to stop hurting him and that he lost.

He shows utter contempt for professional fighters who've been trained to fight only in formal matches, but by the end of the arc, he's ambushed and knocked out by Jack Hanma and dragged into a coliseum fight against Jack and Gaia, and even with express permission to fight as dirty as he wants, he gets utterly beat down in one of the formal fights he showed so little regard for. More ironically, when Gaia camouflages himself with sand from the arena and starts getting in sneak attacks, Sikorsky, a fighter who specializes in deception and underhanded tactics, hypocritically demands that Gaia stop hiding and fight him like a man.

Sikorsky is a tall muscular man in his late twenties. He has short blonde hair in a military cut. He is usually wearing a white turtleneck shirt with a brown overcoat on along with dark gray pants and brown shoes. During some time in the series he replaced them with a blue short sleeved shirt and a pair of shorts, he had also grown a stubby beard on his face, but some time later he shaved it.

Not much is know about his past, family or childhood, but one of the prison guards said if he didn't turn to the criminal lifestyle who knows how many gold medals he could get for the motherland. For example, it can be assumed that he was a member of the Russian army because of his military clothes.

He climbed out of the missile silo that was his prison. As he escaped, walking through a snowy storm, he encountered Alexander Gallen, a powerful wrestler from Russia. Their fight was not shown, but it is known that the convict brutalized him, and then left a message that he went to Japan to know defeat. Some time later, he arrives in Tokyo along with fellow convicts Dorian, Spec, Doyle and Ryuukou Yanagi. Each prisoner arrived in Japan at a similar time and for the same purpose. It is stated that this happened due to a phenomenon called synchronicity.

When Mitsunari Tokugawa, Kanji Igari, and Tateoka meet in a restaurant so that Tateoka meets Tokugawa, the owner of the Underground Arena, Sikorsky unexpectedly appears and challenges Tateoka. Their fight lasts for a short time. The convict does not take any damage, even though the opponent gives his best, and in the end brutally massacres Tateoka's face. After the battle is over, an ambulance arrives to take care of Sikorsky's victim. Kanji Igari, a professional wrestler and fallow of Tateoka, decides to take revenge on a brutal prisoner and attacks him with his fist. Unfortunately, Sikorsky stops his blow and makes a powerful dropkick, which pushes Igari's face into the ambulance car, and after a while cuts his face with his knuckle blows, just as he did to his previous opponent. Mitsunari Tokugawa decides to invite Sikorsky to the Underground Arena.

When they arrive in the Underground Arena, the remaining prisoners and five arena fighters soon appear. A bloody game between two groups is determined. It begins a "war" in which a member of one group can attack a member of the other group at any time.

Later, Sikorsky meets with Igari again. This time, however, Igari comes in the company of his two henchmen, who are supposed to help him take revenge on Sikorsky. They knock out a surprise Russian convict in the street, and then glue his mouth and take it to a pro wrestling club to take care of the prisoner. They tangles Sikorsky's arms with ropes from the ring, and at one point Igari pulls out a gun and shoots at the convict's body. It turns out that Sikorsky was wearing a bulletproof vest. After a while, the Russian releases himself from the ropes and brutally cripples two Igari's helpers. The pro wrestler gives up wanting to avoid a battle or outsmart the convict, but Sikorsky doesn't care and starts attacking him. He uses not only melee techniques, but also weights for training to damage the wrestler. When Igari lies on the ground, the Russian urinates on him to show complete disrespect. Suddenly, the pro wrestler unexpectedly gets up and tries to attack the convict, but is quickly countered by a deadly knuckle blow and ends with a torn neck, then Sikorsky turns around and leaves his opponent almost dead.

On orders from Yuujirou, he ambushes Kozue in her home and is attacked by Baki. After a brief scuffle, he escaped and took Kozue hostage. Baki eventually finds him and kicks him out of 27 story window. He survives due to his inhuman grip and climbing abilities and climbs back up. He then fight Baki again until the police show up and escapes through a window.

Sikorsky then enters the sewers, only to be tracked their by Baki, who forces him to fight nude. Baki put a bucket on his head, smashes it while it is on his head and kicks him in the groin. He then fights Oliva, but is unable to hurt him and is defeated and arrested. He later escapes by climbing out.

He finds Yanagi fighting Baki and teams-up with Yanagi to fight Baki.

He fight Jack Hanma in a bathroom and later a telephone booth and loses. He is then kidnapped and taken to the fighting arena. He fight Jack and is overwhelmed. Jack then decides to swap out with Gaia. After being overwhelmed by Gaia's techniques, he admits defeat.

He is back in prison and appears to be trying to improve his grip strength even more. He can now apparently grip completely flat surfaces and held onto a flat wall every night while he sleeps.

Sikorsky is an inhumanly powerful person. He was able to climb an almost entirely smooth wall for 100 meters despite weighing over 220lbs. Sikorsky is very fast and has great flexibility. When Baki Hanma knocked him out of the hotel, he was able to climb up in a few minutes. He could grab and hold to a fire sprinkler by pinching it with two fingers for a long period of time.

Using his palm strength, he can cut through a persons flesh using only his knuckles, which he can do by sticking out the knuckle of his middle finger and swipe at his opponents. Sikorsky angles his middle finger a certain degree while striking, allowing him to cut open his opponents and give them damaging deadly wounds that would lead to become scars. The results are effectively terrifying. This move is known to be Sikorsky's deadliest move and have used it in many of his fights. For example, against the first-class judoka Tateoka and the famous pro wrestler Kanji Igari. Sikorsky nearly killed Alexander Gallen in a fight, albeit Gallen was still recovering from the fight he had with Jack Hanma.

It was shown that he has great durability. Sikorsky was able to survive when he got shot in the chest five times by Igari's gun (though he was wearing a bulletproof vest), able to even stand after Baki Hanma brutally kicked his balls, stood up and recovered from being beaten by Jack Hanma, while being able to continue fighting him in the underground arena and survived after getting brutally defeated by Gaia. 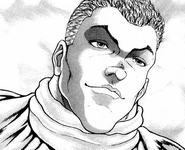 Sikorsky in the manga.

Sikorsky in the OAD.

Sikorsky in the third anime series.