Introduction to the Duel

Tommy is hired to be the representative for the Yajima group, though only for three days as Yajima said that he would leave after the fight. He fights Kaoru Hanayama and delievers a barrage of punches, none of which appear to have any effect. Hanayama then punches Tommy, who then starts to fall when Hanayama suddenly grabs his arm. Hanayama then shatters Tommy's arm and punches him up to the ceiling. Tommy hits the fire sprinklers and falls loudly on the floor. Hanayama then approuches Tommy slowly and prepares to either strangle him with his grip or burts his arm open with it. Tommy then screams while the scene cuts to outside the building and his fate is left unknown.

Tommy Carbine is a legend of the heavyweight division and is the heavyweight champion of the United States with 24 fights, 24 wins, and 24 ko. There was even a time when people feared Tommy Carabine, but he couldn't win against Kaoru Hanayama.

Tommy Carbine in the first season.

Tommy Carbine in the manga. 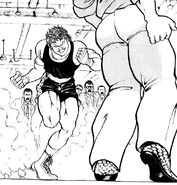